In Memory of
James Edward
Gaylord Jr.
1931 - 2019
Click above to light a memorial candle.
Memorial Candle Tribute From
Frontrunner Professional
"The lighting of a Memorial Candle allows visitors to leave a symbolic gesture of"
View full message >>>
Send Flowers
Plant a Tree In Memory of Your Loved One
Click Here
Menu 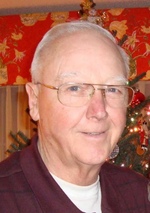 Age 87, of South St. Paul, MN. James passed away peacefully on July 14, 2019. He was preceded in death by his beloved wife of 66 years, Donna. Throughout his last illness, James was surrounded by his family. He is survived by his children Kathleen Gaylord (Dennis Hosford), Thomas (Janet), Robert (Marlene), Richard (Barbara), Barbara (Steven Hawn), Donald (Theresa) and Nancy (Patrick Francis); 20 grandchildren and seven great-grandchildren.
James was born in Saint Paul on December 29, 1931 and was a graduate of Washington High School, class of 1949. He married his classmate and high school sweetheart Donna Mary Kaess in 1951 and they raised their family of seven children in South St. Paul.
James briefly worked for the Rock Island Railroad before he was hired by Northwest Airlines in 1950. His career with Northwest Airlines in aircraft and engine maintenance spanned 41 years until his retirement in 1991. James was also in the Naval Air reserves for 17 years and served as a Naval recruiter, obtaining the rank of Chief. During the 1960’s, James was active in the South St. Paul Jaycees serving as a state director and to the delight of many children, he performed as “Doctor Wernher von Braun” in the annual 4th of July celebration usually blowing up a rocket ship to signal the start of the fireworks display. James was also active in the American Legion and a member of Luther Memorial Church.
After retirement, James and Donna visited sites across Europe and spent their winters in Florida until he lovingly cared for Donna at home until her death last May. He loved his wife and family and enjoyed reading, traveling, golfing, bowling, fishing, gardening and singing. James sang in the church choir at Luther Memorial Church, in the NWA chorus, at the Minneapolis Aquatennial, with Mehailia Jackson, and in the 1000 Voice Hallelujah Chorus performance of Handel’s Messiah.

Visitation will be 5 pm to 7 pm on Tuesday, July 23 at the KANDT & TETRICK FUNERAL HOME 140 8th Ave. N. South St. Paul. A funeral service will be held at 11:00 am on Wednesday, July 24 at LUTHER MEMORIAL CHURCH, 315 15th Ave. N., South St. Paul with visitation one hour before the service at the church. Interment at Fort Snelling National Cemetery.