In Memory of
Sharon Darlene Rose
Swerdfiger (Winnie)
1940 - 2020
Click above to light a memorial candle.
Memorial Candle Tribute From
Kandt & Tetrick Funeral Home
"We are honored to provide this Book of Memories to the family."
View full message >>>
Send Flowers
Plant a Tree In Memory of Your Loved One
Click Here
Menu 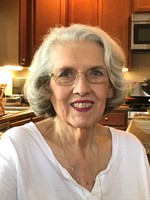 Sharon graduated from South High School in Minneapolis, MN in 1958 and married Jerry in October 1959. After living in Minneapolis their first two years of marriage, they moved to Burnsville, MN where Jerry, a construction worker, had helped build their first home on Hillside Lane.

Sharon was a mom and homemaker for the first part of their marriage, but began working outside the home in 1981, holding numerous administrative positions until 2001 when she retired from Express Scripts. Soon afterwards, she and Jerry moved to a home on Lake Osakis in Osakis, MN.

First and foremost, mom’s legacy is her love for Jesus and the world’s salvation through Jesus. She talked about it up until the very end. Always the prayer warrior, her children and grandchildren were blessed greatly by her prayers for peace, health, and prosperity.

Sharon also wrote poetry, was the family historian, and was the self-taught piano player for a small church praise band in the 1980s.

The family is particularly grateful to the Allina Hospice team who cared for and counseled her during the last six months of life, as well as for Carol Reitam and Sue Huebl, who provided both personal and home care for Sharon and Jerry.

A Family Service will be followed by an Interment at the Pleasant View Memorial Gardens.

In lieu of flowers, the family suggests a donation to Love a Child, a charity near and dear to Sharon's heart.
Donate at:
https://lovechild.giving fuel.com/gen-donation