In Memory of
Donald Ray
Nye
1946 - 2020
Click above to light a memorial candle.
Memorial Candle Tribute From
Kandt & Tetrick Funeral Home
"We are honored to provide this Book of Memories to the family."
View full message >>>
Send Flowers
Plant a Tree In Memory of Your Loved One
Click Here
Menu 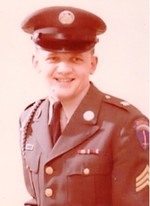 Donald “Donnie” Ray Nye of Newport, MN, passed away peacefully to his heavenly home on June 6, 2020 at the UofM hospital in Minneapolis, MN. Donnie was born on August 10, 1946 to Melvin “Bud” and Irene (Pankratz) Nye in Huron, WI. He moved to Thorp as a small child and grew up there. He attended St. Hedwig’s grade school and graduated from Thorp High School in 1964. Donnie was a star athlete in baseball, basketball and football. His basketball team made the playoffs during the 1963-64 season and he finished his football career as co-captain of the number one team in the state.
Donnie married his high school sweetheart, Anita Bobb, on November 27, 1965. He was drafted into the army in May 1966 during the Vietnam war. After finishing training in Missouri and Virginia, he spent the rest of his army days in Berlin, Germany. They had three children: first one born in Germany and the other two in Minnesota.
After his tour of duty, he worked at North Star Steel as a general foreman in St Paul, MN for 26 years and Cannon Conveyor in Rosemount, MN until his retirement in 2012.
Donnie enjoyed all sports, was an avid Packer fan, and loved watching his children and grandchildren in their activities. He spent time fishing from Wisconsin to Alaska, worked in his yard and gardens, made homemade caramels for family and friends, and enjoyed a good game of cards.
He will be dearly missed by his wife, Anita, of 54 years, his three sons, Kent (Becky), Bradley (Lori), and Samuel (Jessie), his nine grandchildren, Jessica, Nicole, Sarah, Alisha, Makayla, Jadyn, Zackary, Clara, and Grace, his sister, Bonnie (Dave), sister-in-law, Carolyn, brother-in-law, Daniel (Lin), their families, many cousins and friends.
He was proceeded in death by his parents and brother, Dennis.
A memorial service will be held at a later date with burial at Fort Snelling National Cemetery. Memorials can be sent to Camp Croix-Danbury, WI, St. Croix Lutheran Academy-West St. Paul, MN, or Grace Lutheran Church-South St. Paul, MN.