In Memory of
Deborah Mae
Clark (Matthews)
1950 - 2020
Click above to light a memorial candle.
Memorial Candle Tribute From
Kandt & Tetrick Funeral Home
"We are honored to provide this Book of Memories to the family."
View full message >>>
Send Flowers
Plant a Tree In Memory of Your Loved One
Click Here
Menu 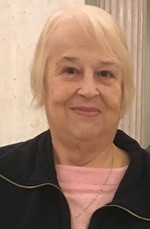 CLARK
Deborah Mae
Beloved wife & mother
Age 69 of West St. Paul, MN
Born September 1, 1950 in Granite Falls, Minnesota. Passed away peacefully on June 23, 2020 with loving husband and daughter by her side. Married for 45 years to Richard D. Clark. Longtime resident of South St. Paul. In 1978, she and Rick finalized adoption of their daughter, Maria Sumitra, from Bhagalpur, India.
From becoming a VISTA volunteer in 1973 (where she met her husband), to Dakota County Child Protective Services, to serving in youth ministry at Luther Memorial Church, to being an active member of Augustana Lutheran Church, to being a SSP Band Backer, to serving on the South St. Paul Board of Education for 3 terms, to 917 School Board, and Good Samaritan Nursing Home Board, to campaigning tirelessly for many DFL candidates, Debbie showed up for people and causes she believed in.
Debbie showed up to ball games, hockey games, art shows, baptisms, first communions, confirmations, band competitions, drumline shows, plays, campaign rallies, protests, fundraisers, auctions, choir concerts, band concerts, visitations, funeral services, weddings, showers, graduation ceremonies, for her daughter, for her siblings, for nieces, nephews, godsons, goddaughters, cousins, cousins' kids, friends, friends' kids. She had a close circle of friends as a member of Bemidji State Card Club for nearly 50 years. She sent cards and letters and gifts to everyone, all the time. She remembered birthdays, holidays, and believed in celebrations large and small. She showed up by taking in strangers, friends, and family with little to no notice because they needed an empathetic ear, a compassionate hug, and a place to sleep. She learned to show up on social media, when she couldn't show up in person.
Preceded in death by her parents, Mae and Doug Matthews, her stepfather, Fred Dahl, and her in-laws, Bonnie and Merlin Clark. She is survived by her loving husband, Rick, her daughter Maria (partner Shawn Sempel) Maplewood, siblings Kent (Paula) Matthews, Cheryl Matthews, Scott (Tracie) Matthews; sister-in-law Patti Matthews; numerous nieces, nephews, godchildren, loved ones, and friends.
A private family interment of her remains is planned. Memorial services to be determined at a future date. Memorial contributions suggested to the South St. Paul Educational Foundation.