In Memory of
Margaret Christine
Allen (Decker)
1947 - 2020
Click above to light a memorial candle.
Memorial Candle Tribute From
Kandt & Tetrick Funeral Home
"We are honored to provide this Book of Memories to the family."
View full message >>>
Send Flowers
Plant a Tree In Memory of Your Loved One
Click Here
Menu 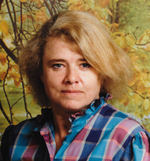 Chris worked as a city bus driver in St. Paul from 1985 until retirement in 2013. She devoted her life to raising her son, proudly seeing him travel the world and become a physician. She also enjoyed genealogy and traced her paternal great great grandfather’s journey in 1863 from Belgium to Waverly, Minnesota.
Chris leaves behind her loving son, Damian; sister Barbara, brothers Dale and Wayne. She was preceded in death by her father Lawrence, mother Margaret, and brother Larry.
She will be remembered most for her generosity, especially toward her many elderly friends.
A memorial service will be held on Friday July 17 at Kandt & Tetrick Funeral Home in South St. Paul.