In Memory of
Thomas Leslie
Pugh
1929 - 2020
Click above to light a memorial candle.
Memorial Candle Tribute From
Kandt & Tetrick Funeral Home
"We are honored to provide this Book of Memories to the family."
View full message >>>
Send Flowers
Plant a Tree In Memory of Your Loved One
Click Here
Menu 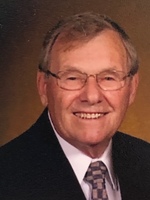 Tom grew up in South Saint Paul. There he met the love of his life, Joann Tauer. After attending high school, he enlisted in the United States Marine Corps, serving two years on active duty followed by a lifetime of devotion to the Corps and his country. He returned home and married Joann, a union that lasted 72 years. He was a proud and caring father to four children: Thomas (Susan), Timothy (Jolene), Karen Schmidt (Bill) and Steven (Denise). He was beloved by 11 grandchildren and 15 great-grandchildren. He was a highly active member of Luther Memorial Church. He served as its President, as a Deacon and on most boards and special projects for over 60 years. Tom worked for many years in the automotive refinishing industry. He was an owner of Autobody Supply and Auto Refinishers Warehouse. He was selected to serve on many state and national industry associations.

Tom and Joann were avid fans of South Saint Paul and Minnesota Gopher hockey.
They watched Packer hockey from the coaches’ corner of Wakota arena and cheered for the Gophers with season tickets for decades.

They enjoyed spending time at their cabin on Big Wood Lake near Grantsburg, Wisconsin. Tom spent many hours fishing with his children and grandchildren. He also joined the Wild River Runners to jog along the roads of Burnett County.