In Memory of
Charles Fred
Hansen
1927 - 2020
Click above to light a memorial candle.
Memorial Candle Tribute From
Kandt & Tetrick Funeral Home
"We are honored to provide this Book of Memories to the family."
View full message >>>
Send Flowers
Plant a Tree In Memory of Your Loved One
Click Here
Menu 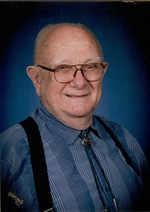 Fred was born November 6, 1927 in Monticello, Minnesota to Waldemar and
Julia Fern (Moon) Hansen and was raised on a farm near Santiago, Minnesota.
He went into the Army early in 1946 and was sent to Italy to help with the
post war effort there. After his tour ended, he married Coral Fay Pappenfus
on August 12, 1949 in Santiago. To them, seven children were born. They
spent most of the rest of their lives together in South St. Paul, Minnesota.
Coral died January 13, 2006 in South St. Paul. Fred joined her December 14,
2020 from Inver Grove Heights.

Fred was a member of the VFW and Concordia Lutheran Church. He liked
playing cards, hunting, fishing, camping with large groups of friends and
relatives, long road trip vacations all over the U.S. and Canada, going
south for the winter, and tinkering in his garage. He made his semi-famous
yellow camper in the garage.

A celebration of life will be planned for a date next year. Fred's
ashes will be interred at Fort Snelling National Cemetery.

We wish to thank all of the wonderful folks at Suite Living in Inver
Grove Heights and the hospice care givers who were able to be with him
during the last six weeks.