In Memory of
Roger Elbert
Needham
1946 - 2021
Click above to light a memorial candle.
Memorial Candle Tribute From
Kandt & Tetrick Funeral Home
"We are honored to provide this Book of Memories to the family."
View full message >>>
Send Flowers
Plant a Tree In Memory of Your Loved One
Click Here
Menu 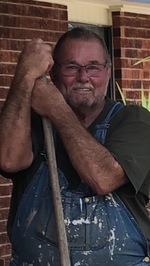 Needham,
Roger E.
Preceded in death by son Jason; parents Raymond & Gladys; brother Rodney; sisters Karen Thompson and Debra Scott. Survived by his wife of 52 years Marilyn, sons Jeffrey and Justin (Nancy); granddaughters Kassandra and Hailey; brother Russell (Linda); sister Cheryl (Roger) Tollas; and many nieces and nephews.
Roger grew up and lived a humble life in South St. Paul. At the age of just 20 years old, he was hired by the St. Paul Police Department, where he attained the rank of sergeant. After nearly 33 years on the job, Roger retired and immediately moved the “cabin” near Spooner, WI. However, in his more recent years, he became a snowbird, spending several of the wintery months in warm Laredo, Texas.
In his spare time, Roger was always working on something. Whether it was fixing up the house, tinkering in the garage, or splitting wood for the winter, his projects never stopped. And those that knew Roger well, know that he would not pay someone for something he could do himself. He was always busy.
Over the course of his life, Roger was known by many names. Son, brother, husband, dad, uncle, Sgt. Needham, and friend. He was even given the name “Rogelio” from his daughter in law. Yet, he was most proud to be called Grumpy Grandpa.
Whether you were family, longtime friends, or a bar room buddy, you were blessed to know such a great man. His questionable smirk, tell-all chuckle, and sarcastic personality will be dearly missed
Visitation Monday, Jan. 11th, 11:00 a.m.- 1:00 p.m. at the KANDT & TETRICK FUNERAL HOME, 140 8th Avenue North, South St. Paul. A Family Funeral Service to follow. Interment Oak Hill Cemetery. In lieu of flowers memorials preferred to American Heart Association.