In Memory of
Shirley Mae
Trebesch (Laakso)
1936 - 2021
Click above to light a memorial candle.
Memorial Candle Tribute From
Kandt & Tetrick Funeral Home
"We are honored to provide this Book of Memories to the family."
View full message >>>
Send Flowers
Plant a Tree In Memory of Your Loved One
Click Here
Menu 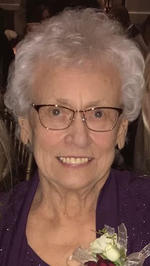 Shirley Mae (Laakso) Trebesch of Pengilly, MN, died peacefully on March 14, 2021.
Shirley was born on May 18, 1936 to Arvid and Irma (Palmgren) Laakso in Sparta,
MN. She is preceded in death by her parents; husband of 53 years, Richard
Trebesch (2013); sons Ronald (2020) and Thomas (2011); granddaughter Allison
(2013); sister June Sutich (2005), and brother Lawrence Laakso (2015). She is
survived by eight children, Richard, Susan (Dean) Ingvalson, Debra (Russell) Rizzo,
Mary (Tom) Karrow, John, Annette (Todd) Ratcliff, Barbara Estenson, and Paul;
daughter-in-law Eileen (Ronald) 25 grandchildren, four great grandchildren, sisters
Inez (William) Nelson and Karen Laakso; and many nieces and nephews.
Shirley and Richard were college sweethearts. They were married on November
26, 1959, at Grace Lutheran Church in Marble, MN. Though Shirley didn’t return
to teaching after their fifth child was born, she cared for many young children in
20+ years of in-home daycare. Shirley and Richard raised their family in
Woodbury, MN and spent their summers at the cabin on Swan Lake where they
eventually retired. Shirley will be missed dearly by all who knew her. The date for
a service is yet to be determined.